History of the Mobile Phone

The first mobile call was placed in St. Louis, Missouri on June 17, 1946 after 10 years of research by Bell Lab scientists. The call was made from a telephone set installed in an automobile. 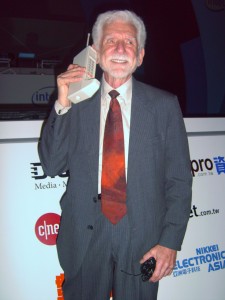 Fun Fact – Only three customers in any given city could make mobile telephone calls at one time on the three radio channels.

1960: The first fully automated mobile phone system for vehicles was launched in Sweden.

1965: AT&T introduced the Improved Mobile Telephone Service with additional radio channels and customer dialing instead of using an operator.

Fun Fact – In New York, NY, mobile customers had to wait 30 minutes to place a call.

April 3, 1973: Motorola researcher  made the first mobile telephone call outside of a vehicle. The prototype weighed 2.5 pounds, had a talk time of 30 minutes, and took 10 hours to re-charge.